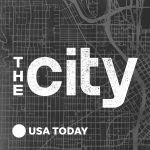 There's this vacant lot on the west side of Chicago. It's about a half dozen miles from Chicago's downtown what we call the loop. And this lot is huge. This lot looks to me like it's about a full city block. It's it's a big. It's a big live. That's Gladys, Woodson and Jacqueline Rodney who live nearby and it's now it's pretty overgrown like there's full-sized trees. There's like fray grass. So what did it look like when it was when he was operating? A miss. It will miss. I this the best I can say for it. I, I started visiting this lot which is in a neighborhood called north Lonsdale after hearing a story about something that happened here if I hit, oh, big, eighteen wheelers, mine up, you know, I just thought, well, hey, somebody just parking their trucks in this to guy, say, MS, Woodson, come down, look at this. Do you know somebody's dumping over. I've been reporting in Chicago for more than a decade. And I reported all kinds of stories about the built environment about secret tunnels hidden underneath the loop and about how your place a train bridge. While the train is still running. I've also reported on housing discrimination and predatory lending so stories about all of the remarkable stuff that gets bills in Chicago, but also about how it gets built and about all of the foul and crooked things that people will do when they think nobody's looking. And so the story of what happened on the slot. The story I want to tell you stunned me despite everything I already knew about Chicago about how corrupt and ruthless. It can be about how stark the divisions are between black and white, rich and poor between the people who hoard power and the people who will fight for their fair share. Anytime you see anybody drive over a vacant lot in limbo, you know is no good. This story is about a giant illegal, dump six stories high. It was huge mountains, concrete garbage built from the broken pieces of a city in the midst of so-called renaissance thought that downtown city hall would do right by the people you think they care less about us and built not just by dump trucks and bulldozers. And construction cranes, but also by corruption, apathy and greed. So I said, okay, if a public official came by today and said, you know, I need five hundred dollars. What would you do any reached into his back pocket? And he pulled out five one hundred dollar bills. The man who built this dump, had deep ties to Chicago's criminal underworld. He looked at the honor of the restaurant. He goes, if you don't pay your milk money, you're gonna get a pineapple through the window. He profited at the neighborhood's expense. This fucking. Table. I made a lot of money over and before he was done, the FBI would be protecting him. I'm neymar and this is the city. A new podcast from USA today coming September twenty fourth subscribe now on apple podcasts or wherever you listen.