Day 830: Trump is suing banks to keep them from complying with House subpoenas the NYT reports 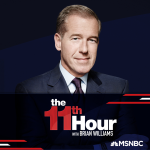