Beyond 23&Me: A Deep Dive Into Ben Greenfield's Personal DNA Results (& How To Get Your Own Genes Interpreted) 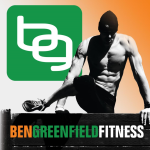