The Media's Coverage Of The Impeachment Hearings Continues to Be Absurd; Thanksgiving Is Not 'PC' Enough For American Universities 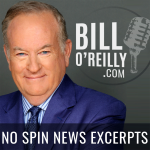