Productivity Isn't About How Much You Get done 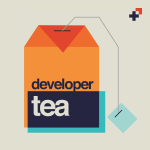 One of the major shifts but the world has seen for the last thirty or so years is a shift towards desiring hyper productivity. The idea that we can do you more and continue to learn to do more with less has kind of taken over our way of thinking being about work trying to find the most productive schedule the most productive tool and seeking seeking relentlessly the growing output machine the ability to produce more and more more and more volume in today's episode. We're going to talk about a different way to think about productivity and hopefully shift your mindset to a more effective solution. My Name is Jonathan Controlling listening to developer T.. My goal on the show is still driven. VELDE's like you find clarity perspective and purpose purpose and their careers. Today's episode is going to be a short episode. We do not have a sponsor but in lieu of our sponsor time. I'd like to encourage you to go and do one of two things one if you haven't subscribed go ahead and subscribe in whatever podcasting. APP You currently use. There is a native application On Mac os now the Pike casts APP and of course all of the APPS that you have in your phone this will help you stay up to date with the latest episodes episodes of the show because we do three a week not three day d three week and we're constantly delivering these episodes so it's easy to get behind and encourage you to subscribe it and the other thing is sheared this episode with a friend. Or if you don't have anyone to share it with Lee Review. ITN's this helps spread the show. Oh beyond just you. When you find something of value and you share it with someone else you don't just add to the value kind of multiply because you get a chance to have someone in your community. Minniti that you can have a conversation with about these topics we discuss on the show. Okay so I want to talk about this idea of the endless slope this upwards hill of productivity wanting to do more and more increasing the output of a team this is the mandate mandate that so many engineering managers are given to increase the output of the team and interestingly enough humans have been able to the increase their output. We have tools that help us be more productive with their time. But I want to encourage you to take a step back and look at how how those increases in productivity actually happen those kind of climbing the hill output increases as a general rule those are increases that everyone benefits from kind of at the same time. They're increases that are not behaviorally specific there instead brought to us by some shift in the market and for the most part the productivity of an individual is not not going to drastically outpace the productivity of another individual noticed that. I didn't say that the effectiveness of one individual will not greatly outpace the effectiveness of another individual productivity in this scenario in this kind of definition Jeff Initiative is talking about the sheer volume of activity. That can be completed. The number of lines zip code for example this is a gross measurement of output and very often we wrongly believe that the gross measure measure of output is the most important measure. This is quite simply wrong and we need to be thinking differently as managers and as developers. So what should we be thinking about instead. I went to instead encourage you to think about minimizing the output minimizing the output to get to the same place. So you set out a goal as a team. Let's say you have a series of tasks a list of user stories. However you manage the work that it is that you have to do. I want you to attack that work to think about that work and process it through the lens of. What is the least amount of work necessary to get to that place. Productivity and effectiveness is not about how much you do as much as is. It is about quite simply what you do this week. I encourage you to mark as many things as you can. An off of your to do list by simply removing them deciding not to do them and instead refining that list to the things things that absolutely should be done. The highest importance items on the list. If you do this as a team you'll be focusing pissing on the most important most valuable things productivity at least from your perception will seem to soar even though. WHOA you're getting the same number of things done if the same output volume that output volume should have a high I signal to noise ratio where the signal is level of importance or value. And what you'll find as you continue to do this refinement. Payment process is things that you even originally thought were important. They seem to become less important. The more you refine the most valuable way to spend your time as a team or as an individual you'll find that the LE- The less important things tend to kind of follow away on their own. This is the picture of increasing productivity on a team. It's not about squeezing out every single ounce of energy energy that you can. It's not about optimizing your day for the longest work sessions. You can manage to live through instead. It's about removing the unnecessary. Thank you so much for listening to today's episode developer T-. Today's episode was produced by Sarah Jackson. My My name is Jonathan Cottrell. And until next time. Enjoy your tea.