743: The value of hope even when death is certain, with Dr Lee Warren 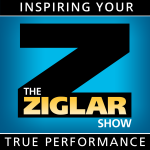