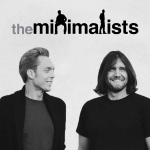 uh-huh guess what the minimalists are going on tour with a live version of the minimalists. PODCAST and I want to invite you to join us for a night of less. Find your nearest city at the minimalists dot com slash tour. We'll see there are our desires tied to our fears and vice versa Let's talk about fear here because it does seem to me to. To a great extent stint maybe our fears often fuel our desires or it could also stumped them to write like my fear of of going snowboarding. I have absolutely allowed that to just stunt my my love for snowboarding but I'm the type of but I'm the type of person though where it does fuel me go in the sense that I'm fearful something I'm like. Oh I gotta go out and face that head on and I'm going to see if I can conquer it but I could see where a lot of people they want to go to the party. They want to be outgoing. But they're so scared. What people are GonNa think that they kind of like shoved that desire down that don't do. I think they still have the desire though they just don't take action on it. I mean maybe this desire go away at some point but it seems to me that that when we were afraid of something it often It's it's certainly tied to our desire. There's something going on that. I mean a simple example. Is this happened to me. I was at a party recently. There was a guy there We got talking and he was telling only me that he was terrified of death. How To real fear of death on with something that oxy power lies demo at a lot of time in his life and as we were talking He because he's also tried to find solutions to this and And but we were chatting and I was kind of like. Oh well here you know what if what if you're not afraid creative death what if you're obsessed with And and actually you're what what you're afraid of your desire just like if you look for cliff and and you feel like you want to jump you know you feel like that because you fear jumping because there's something in you that wants to jump so. I live in the thirty first floor of an apartment and I have this window lupins up on a house on a plastic kind of barriers. We count full light. But you can't see. It is clear plastic. So I'll often whenever someone comes up I'll see if they can like like like put their hands behind their back and full against the plastic you know so but It's interesting how some people are terrified of even it's not a nice thing to do to people but Or some people are terrified of going near the window. Even sure on on. It's not everybody's then entrusted daft but because sometimes if you got that fear ear of falling it actually shoes that you have a fear of you have a death. Drive a fear of death so that that's an example of high and it was funny 'cause talking to him it did she inches perspective perspective like he did is we talked. He was like actually. There is a part of me that wants to die and he is like and so because because here was he was asking me because he news that I'm interested in these ideas and he was gonNA hide. I overcome my fear of death on wall. I talked invites. Going no notably overcoming your fear of death. You never will. What you have to do is look at your desire to die on as you make peace without desire and as you work at three. Fear of death will disappear. You're trying to get rid of the fear of death. Breath work work through your desire and as you work through your desire. The fear will disappear. Alright all right. We hope you found value in that standalone quickey episode. If you enjoyed it and you want more Ryan and I record a long form maximal episode each week over at the minimalists private private podcast find all the details and all the good stuff including an additional private podcast episode every week over at the minimalists dot com slash support.