Day 5 of No Sports and Remembering Game of Thrones....featuring John Collins 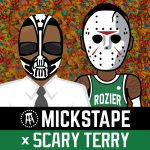