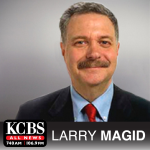 Larry tell us more about the study. This is disturbing but before people panic. I want you to know that the very article that described from the chicago tribune which paid for the research points <unk> out there is no clear evidence that what i'm about to say necessarily mean that these phones are going to harm you having said that i think it is an interesting interesting and whether serious issue several phones including the iphone seven <hes> samsung galaxy s. nine and phone through motorola and by the way if you go larrys world dot com you'll get a link to the chicago tribune story which actually have all of these lifted shows the radiation levels several did exceed the previously reported radiation levels which means that they are higher than government standards now the f._c._c. has told the tribune that they're taking the unusual step and going back back and looking again conducting its own tests to take another look at these phones because the f._c._c. had approved them in the past so it is a concern and we've known for for a long time and some of the european especially scandinavian countries have tougher standard than we do berkeley of you mentioned health disclosure rule and we're coming up and five g. where there are all all thirteen questions on that technology in radiation so i again i'm not panicking but i think it's important that we recognize that there could be some issues regarding radiation and smartphones.