At the Podium: The Unfeel Good Win of the Season 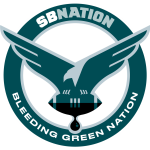