Phinsider Radio: Diagnosing the Dolphins after a week 1 loss to the Patriots 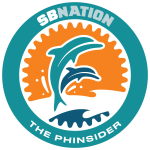