Pensacola under cyberattack. Notes on ransomware. The US Justice Department IG report on Crossfire Hurricane. Who let the bots out? 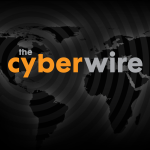