Melissa Gorga breaks down RHONJ Reunion PT1 and Mark Consuelos reveals he broke up with his wife Kelly Ripa a week before their wedding! 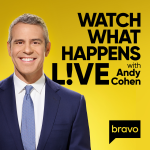