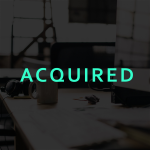 Hey acquired listeners. It is Ben and David here with a special announcement for you. David or you pumped. I am super pumped who listeners. Our next episode is going to be a crossover acquired adapting episode. It's acquired in that it is a big tech company that we've wanted to cover for a long time and it's adapting in that it's telling their story of change in the face of dire crisis and coming out stronger on the other side which of course David do you want to give away? What the episodes the reason we chose this one by the way. This also makes me think it's it's the best of both worlds for some reason. I'm thinking of You know the van Halen Song from the eighties nineties. Best of both worlds. I don't have a okay so we have the original. Og Adaptation. We couldn't think of anything better especially for the reason. We are doing this episode. Which will tell you in one second. We're doing Intel the original adaptation pivot. You might call. Although we like the word adapting and I think Andy Grove would agree with that from the memory business in which they were founded and operated for the first ten fifteen years or so of their life to what we all know them as the microprocessor company. Yeah well don't give too much more away. So it's like whole crux of the episode man. Now got to get people excited. Yeah well the reason. We are announcing this is because this episode is going to be released as part of the lineup for something called pod palooza which we're really really excited to tell you about The awesome team at At glow came up with this and as as folks no. We work very closely with them. It is a virtual podcast festival to raise money for Cova nineteen relief. It's effectively like the live aid of our time But at home in sweatpants instead of Van Halen. I don't inhale and was there but you get you get us and many Mercury's instead you have podcasters we're going to be in sweatpants worship the charity that we're working with or that that pot of Pollu- working with called give directly and you'll hear a little bit from them after this so I think it's really cool organization and I'm excited for you to to hear from Katie from give directly about the organization The festivals happening on April Twenty Fifth and twenty sixth. But you can get your tickets now. Podcasters far cooler than us are participating including Lavar Burton for all U. T. and G. I was GONNA argue. But but he's calling us for sure for sure Dan primax who you know. Has has been on the show Patrick O'shaughnessy from invest like the Best The good people at one If anybody who listens to to twenty thousand Hertz that's been I think my carve out at least once Dallas Taylor the host of that is going to be participating so all Really Cool podcasters coming together for for a great cause. A few people have asked. We announced this on twitter. Already This Intel episode may eventually be in the main feed but we'll certainly start as a As Potter Palooza exclusive so You should definitely Definitely check it out if it's for you You can you can donate whatever you feel is right For A ticket I think the suggested donation is twenty five dollars. But you know whatever he's doing whatever you WanNa do at a pot PALOOZA DOT ORG or P L Z A dot Org You can see the full line up there. You can also click the link in the show notes and decide if you WANNA tune in. I think I'm like obviously excited do but I'm even more excited to hear from all the other podcasts. I think it's GonNa be a cool opportunity. Discover new New great other shows totally and excited for you guys to hear back give directly to this is It's super cool. What they're doing. They're getting cash to people who need it right now and Really glad the glow folks came up with this idea. And all the proceeds go directly to give directly and getting passed on directly to people who need it so great to be part of it. Well David Great Segue listeners. We are going to To leave you here with Katie from give directly to tell you what it is all about and we we hope you'll you'll join tune in. Hey I'm Katie. From give directly in the nonprofit partner of pot a police over the last decade gift directly has delivered over one hundred fifty million dollars globally in light of cove in nineteen. We launched a cash relief program in the United States giving a thousand dollars families who have been hardest hit by the economic impacts of this virus. So far we've delivered funds to over fifteen hundred people. They spent it on rent food diapers and even capable so their kids can learn remotely. That's the great thing about giving cash. It allows families to prioritize and spend on what they need most and that's where the money we race from Potter Palooza is going. So thank you to this podcast for supporting the effort to everyone listening. Check out this festival had to potter PALOOZA DOT ORG or P. L. Dot Org for short that's P L Z dot. Org thanks and hope to see you there.