The Legend of Tarrare, the Insatiable Glutton Who Ate a Quarter of a Cow Daily 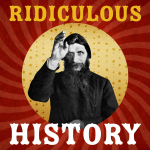