Off The Record: Joe Shreds the Powder on the Mountains 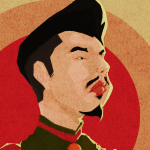