Ep 415 - My Grandmother Asked Me To Tell You She's Sorry, by Fredrik Backman 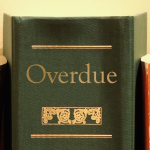