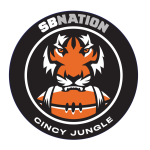 <music> hey everyone it's anthony with the orange black insider bengals podcast enjoy this set of interviews recently done by our co host john on share in these interviews include hearing from the likes of bengals head coach zack taylor quarterback andy dalton running back trayvon williams wide receiver josh malone offensive lineman billy price and linebacker jermaine pratt. These interviews also feature other members of cincinnati bengals blogs and podcasts. This is the type of content we love to bring you and will continue to do so during the preseason. He's in regular season and offseason. Thanks for listening house campaign so far for weeks. He's been going well. I'm getting better each and every day <hes> now i've been china improves displaying my facebook name being comfortable out there. You played safety when you started needed in college. How's that transition and you came off a year off when you move to linebacker. How is that you got a lot bigger. Obviously i was still being like when i played thirty. It wasn't like a bit transition. You know what i mean. It was the same thing but you just like down in the body so you had to see the pool and see trap zone. Whatever depending on whether run obey low and running back and stuff it is like block has come on says. Get them chad them more because as diva. You really have to shave around one block. You took off until they come on faceting they do h._r. Blocking you were pretty good as a blitz. He said you like blitzer more like back in. I mean meaning whatever they use me at thirty now y'all wanna. They wanna believe things yeah. I wanna be wanna listen. They wanna cover on lie to me or like in any game. I wanna be like messed up on a tiny bit. What's been the biggest challenge for you coming in as a rookie the n._f._l. Is at speed as something mouth. Oh all think he's like a challenge like this. Get comfortable with the routine. Everything is like up temple so you can say speed any any everything like fast. I just say this being comfortable out there and this would be ready for tony working with the audio helmet with the second team is that part of the comfort level of them and you are feeling more comfortable because they have you out there because when i did it our stuttering i never like ain't here light right somebody like speaking to you in the hood so it is definitely like making a comment you in the huddle you the man in the huddle you gotta take control of the huddle. You gotta get a defense to call aw got to sit in the front. You got the backing of what to do this. Most definitely build confidence with that second team. You've been working laboratory evans lizard. What'd you guys. Is chemistry like working together. Ah is good. You know what i mean. He's he's he. He has games so basically. Tell me stuff that. I don't know if i mess up on the call here. Correct me so i think he's huge. He's keep on working with any of them because i work with most automakers. Can i put in when i go like i'll be back. I'll be like the sam what a wheel so it is different. Tell scott like some your defensive coaches since they're all brand new to the team. Also i mean hard coaches. You know what i mean. They wanna they wanna <unk> put imprinted on the culture that they wanna have they wanna physical defense and accountable. You gotta be accountable on his defense and been great teammate to the one because everybody who's replacing them coast to coast him and everybody was replaced love. Your linebackers coach isn't a skier the house he's still he's still the same tim mcgraw. If i don't do something he made me do over and over and over so he really wants. Tell me pushing me every day. What would you say is a leader on the defense. Is there somebody that stands out to you that you've been looking to since you've been here i mean it's several the different look leaders. You know what i mean all of them. If i miss something you got you got <hes> shine guy out person eh me you got like several guys that joy you know. You got several guys on on defense. I give feedback to the aid tell role in the night resolution when when they do on a great so i think there's a lot of defense you see yourself as a leader in this defense in the future <hes> yes. That's my goal might bill snake for everybody my peers around me my teammates so that's my that's my golf once again. You've been listening to one one in a series of recent bangles interviews courtesy of co host john sheeran he recently spoke with members of the cincinnati bengals including head coach zack taylor quarterback andy dalton running back tree on williams wide receiver josh malone alone offensive lineman billy price and linebacker jermaine pratt john was joined by other members of <hes> both since he jungle uncle dot com as well as other bengals podcasts but this is a pretty exclusive set of interviews that we bring you on our podcast. We think the cincinnati eddie bengals for the opportunity to speak with all of these members of the team and we thank you for listening to this set of interviews. We'll continue to bring you more of of this type of material throughout the rest of the preseason regular season and into the offseason. Thanks for listening <music> <music>.