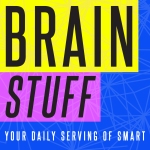 This episode is brought to you by IBM Today. New problems need new. Thinking retailers are turning to the cloud to restock shelves more quickly teachers are working with ai to rethink the classroom. Let's put smart to work see how IBM's helping at IBM DOT com slash Cova. Nineteen welcome to brain stuff. A production of iheartradio. Hey rain stuff. I'M LAUREN WELCOME. And today's episode is another classic from our former host Christian. Sagar this one has to do. With the strange phenomenon of animals seemingly miraculously escaping certain kinds of natural disasters. Do they have a sixth sense about it or do they just make better use of their senses than humans? Favoring stuff it's me Christian Sager. Have you heard about help? Het sometimes go missing just before an earthquake hits or how about in two thousand and four when a soon Nami hit Southeast Asia and killed more than two hundred thousand people but almost no wild animals. And did you know that dogs? Elephants antelopes bats. And even flamingos fled the scene before the wave. Hit even flamingos. Many people assume it's because animals are more attuned to their environment than we are others like the United States Geological Survey Gency say there's no connection between animal behavior and natural disasters. But if there were wouldn't it weren't a closer look think of the impact. It would have if we knew. Animals could predict dangerous natural events now the majority of researchers looking into this art claiming animals have a sixth sense or anything supernatural going on what they do think is that animals make greater use of their senses than we do using these. They react to environmental signals. That we stupid humans. Just don't notice of course different species have varying sensitivity to these fluctuations and most evidence is anecdotal but if animals are aware of natural disasters. Here's how they know. When troubles a-coming most likely animals can hear sounds that we can't especially the infrasonic low pitched vibrations made by earthquakes. Storms volcanoes avalanches and oceans in some studies. Researchers found that these sounds usually lower than twenty hertz make humans uneasy and even nauseous so with their greater spectrum of hearing. It makes sense that animals would perceive these before us as unsettling. If you heard a deep rumbling sound coming at you from a wide angle what would you do to hang out and make sandwiches or would you run for your life? One study that supports infrasonic. Hearing theory happened when Stanley Coren was studying whether dogs suffered from seasonal affective disorder. One day many of his one hundred ninety three tests. Dogs suddenly flipped out. Coren could not figure what was going on until a day later when he noticed that an earthquake struck nearby at a six point eight on the Richter scale after reviewing the results corn found that fourteen of the animals had hearing impairments and these were the dogs that didn't become anxious before the earthquakes looking further. He noticed that dogs with floppy ears were less likely to be agitated than those with perky open ears so it looks like the strength of their sense of hearing was what a tuned the dogs to the earthquakes low tones. Another theory is that through. Their sense of touch. Animals can feel vibrations through the ground or sense shifts. In air or water pressure hurricanes are known to decrease such pressures and scientists have observed that sharks change their behavior when storms cause pressure drops swimming to deeper waters where they'll be protected. Birds and insects also seek cover when this happens. They're also sensitive to something called railay waves. These are minute vibrations that travel through the Earth's crust. These waves are inaudible and traveled ten times the speed of sound which would explain why some animals sense disaster coming sometimes days before it strikes. Now that you've heard the theories. Do you think we should make safety decisions? Based on the behavior of our local animals. Well China did in nineteen seventy five when they evacuated a city before an earthquake hit after its animals showed signs of anxiety that was estimated to have saved thousands of lives. Today's episode was written by Christian and produced by Tyler. Clang for more on this. Lots of other topics visit. How stuff works. Dot Com rain stuff is production of iheartradio more podcasts. Iheartradio the iheartradio APP apple podcasts. Or wherever you listen to your favorite shows. Hey Guys Sammy J and I'm so excited to announce that season finale of my podcast with him Jay we have NBA All star and mental health advocate. Kevin love nothing robs us of more human potential than mental. It's so it's like the pandemic that nobody's talking about. We talk about Kevin's journey with his anxiety. Depression and of course his amazing NBA career. Listen to let's be real with Sammy. J on the iheartradio apple podcasts. Or wherever you get your podcast.