#1917 Recession Proof: How to snap back from sudden financial loss 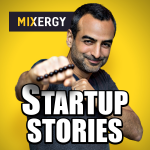