Season 2 Episode 4: Understanding "Elephant Speak" and the Animal that sounds like a... Chain Saw? 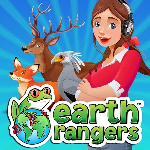