The Rack Extra Reviews: 100 Things WWE Fans Should Know & Do Before They Die 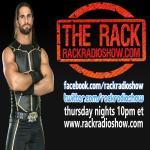 The cuts to and the extra games right here. You're on wild talk radio dot com. He's rocked. I'm lindsay and we're back. We're talking about a hundred things w._w._e. Fans should know and do the four they die by the wonderful bryan alvarez with a ford by wait for it lance storm <hes> <hes> from our friends at trump books available in bookstores right now. We're talking about the book to summarize what this book is all about. It's a simple uneasy. I guess away follow like back stories on wrestlers on stories from pro- professional wrestling for instance. There's a chapter in boca talks about shawn michaels and it gives a brief history of shawn's career from san rockers all to come back in two thousand to get the story about bret hart the undertaker you name it. There's there's stories about everybody like little things sections on the menendez war the death of w._c._w. All that isn't this book <hes> um. I have one issue with the book and it's a minor on it misses some of the finer details you get in other books because trying to do one hundred different <unk> things in just a small book so it's like right. You're missing some of the keep points details but you get all the high points of certain and things like you could have gone deeper and clearer rutger the tigers career stuff like that but you get a nice little compact history of them in this book which i find interesting listen. This is something that if you just want a really light history of wrestling of w._w._e. And w._w._f. Previously free this is your book. This goes into pretty much everything that's happened in w._w._e. Slash f for the past twenty probably the thirty years an it's a wonderful reference to look back like you know you mentioned. Undertaker has an entire chapter which the chapters are generally like a page two pages <music> but it gives a real brief overview of who they are and what they've done in kind of a little back story behind the person. That's that's doing the character character you know so. They did that for take her. They did that for hunter. You know they did that for john. Cena bryan pullman yeah the list goes on and on and on of the names that are in here and the stories that you're in here and it's nice that they talk about like things that were outside of the storylines including the steroid scandal for w._w._e. In vince mcmahon and how l. big that was and kind of what happened there and so it's really nice. It's a really good history light read. If you wanna read it what i like in the back back because we all need to know this. This is important wrestling terms. You should know so everybody out there that uses wrestling herbs herbs and doesn't use them properly. Please read this book because it gives you a nice little history or i should say nice little definition of what everything means and i'm sure everybody in the business probably hated this but i appreciate it because i don't. I don't know that i don't pretend to know that so it's nice to i know that when people are talking about certain things that you know okay that's what they mean. Even though i did a lot of it you do a lot of it just basically everything so besides besides talk about a wide range of people like hey man and goldberg and take your ramos through shop mentioned it also tells you things you need to do as a wrestling fan fan like he goes into detail why you should go to an inex- he takeover and experience atmosphere right or sit fro at a wrestling show. It's like it gives the difference between the history of wrestling and stinks you needed to as a wrestling fan which is why it's called the one hundred fans should know and do before they die. You need to go out and experience some stuff like that. Which is cool. It's a nice little. I'll look into it as a fan as well. Thanks you need to go out and experience because he tells his experience being at an annex t show or i think front row as a rousing show as well so it's like stinks you need to do so. It's it's a nice mixture of everything. I'll say that it's a very unique style book if and if you like the death of w._c._w. Which was written by bryan alvarez many years ago already. I don't you will be a fan of this book. Yes is very good. I recommend everybody go pick it up. It's available double at fine booksellers now so please check it out. One hundred things deputy fan should know and do before they die by bryan bryan alvarez from the wonderful people over britt triumph books but i think that does it for us. Do you think makes your your falls on facebook twitter instagram at rock radio show. It's at weill talk radio twitter facebook dot com slash talk remillard. Make sure you vows subscribe to accept the make sure you catch our lives every thursday night. Ten pm eastern called the rat or here while talk radio dot com and rock radio show so so farrah's and lindsey ward. You've been listening to the extra views right here in wild talk radio dot com and everybody sit tight because we will have another review coming very shortly but till then i the.