Listen: LG offers a taste of what 5G looks like in South Korea 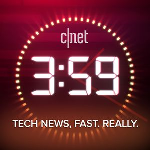