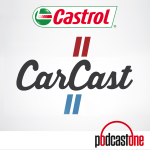 George Floyd, President And Terrence I discussed on Sean Hannity

Episode 92: The African-American view, from Taiwan

The Trip 9 hrs ago

Protests and riots continue across the country

Armstrong and Getty 15 hrs ago