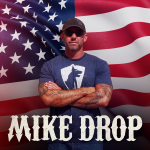 Mark and Melynda 12 hrs ago