The Indicator from Planet Money Coronavirus: A View From Hong Kong 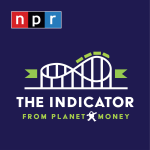