Off The Vine with Kaitlyn Bristowe A highlight from Grape Therapy: Predictions for Paradise and 20ish First Date Questions with Justin Glaze 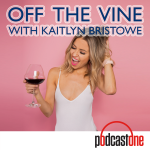