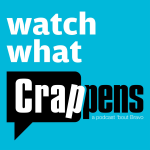 Watch What Crappens 4 months ago

Jason and Alexis 15 hrs ago