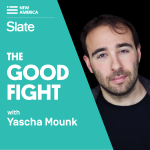 The Good Fight 7 months ago