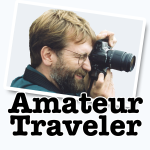 The Amateur Traveler Podcast 2 months ago