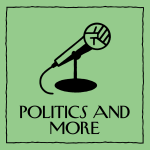 Politics and More Podcast 9 months ago

Hey, It's Cory Hepola 6 hrs ago

Orlando's News at Noon 6 hrs ago

Total Information AM 12 hrs ago