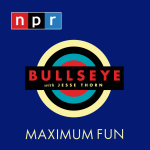 Bullseye with Jesse Thorn 2 months ago

Balance of Power 44 min ago

Armstrong and Getty 57 min ago

News and Perspective with Tom Hutyler 49 min ago