Listen: Setback for Lakers as Kawhi Leonard and Paul George grabbed by another team 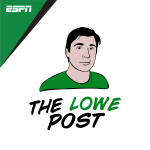