Listen: Lewis Hamilton on How His Formula 1 Career Led Him to Collaborate With Tommy Hilfiger

The Business of Fashion Podcast 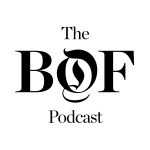