Listen: Trump's intelligence chief warns China is the greatest threat to US since WWII 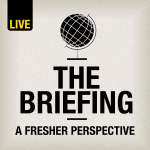