Listen: Why Curiosity Is the Key to a Successful Career with Philip Van Dusen 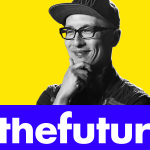