Listen: Here & Now speaks with Anna North to look at where we are in the Me Too movement 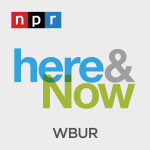