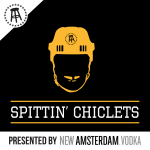 Jason and Alexis 15 hrs ago

The Retirement Trailhead 12 hrs ago

Inside Out with Tami Michaels 9 hrs ago

Abdul at Large 9 hrs ago