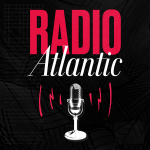 Our American Stories with Lee Habeeb 10 hrs ago

News, Traffic and Weather 9 hrs ago

Nightside with Dan Rea 11 hrs ago

This Morning with Gordon Deal 4 hrs ago