Listen: What I Learned by Being a Part of Taylor Swifts First $1 Million Dollar Month on eCommerce with Brendan Kane 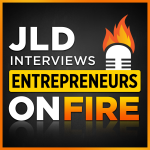